Cecil the Lion—Significance of His Death 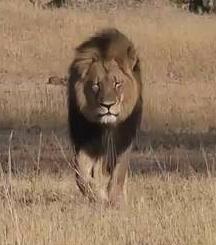 As I read the various news stories about the death of Cecil, the lion from the Zimbabwe National Park, I felt confused about his significance, and so I turn to Spiritual Presence to guide me. Here is what I learn:

The killing of animals is, in general, considered to be fine by most humans. Humans use animals for food, clothing, and decorative items. In addition, animals are used for their healing properties and in testing of drugs and other items used by humans. The animals that are approved for killing differ from country to country and from region to region. For example, in the United States the killing of dogs is a crime in some states. In India, the killing of cows is a crime in some states.

Lions are treasured and feared. When humans fear for their lives, they justify the killing of lions. When the lions are endangered in a region, they are protected by humans—unless a lion is threatening the life of a human.

Selective caring for the welfare of animals is a fact. Some people care more about the welfare of certain animals than others. This caring is generally a cultural trait.

The best way to protect animals is to unwant them for status symbols and fashion statements. Unwanting the animals would stop local people from providing their dead carcasses.

Unfortunately, many humans are uninterested in caring for animals in their natural habitats.  Because of this fact, the significance of humane zoos cannot be stressed enough.

If Cecil the lion had been in a humane zoo, he would not have been killed by a hunter. His living conditions would have been stunted, but he would have lived out his life. Living in a natural habitat gave him thirteen years of free, lion living.

Perhaps if humans remembered that they are animals too, they would care better for their brethren.

Someone to Watch Over Me