Are men or women superior? Neither! 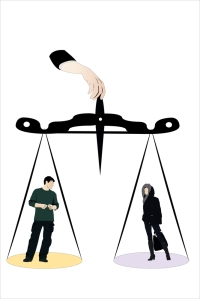 The focus of recent blog posts has been on the sense of superiority. Today’s post contests superiority by virtue of a chromosomal setting.

The setting for sexual existence—as a male or as a female—determines gender but does not bestow superiority. Gender superiority galvanizes unnaturally through bewildered understanding of males by females and of females by males.

Males and females are equally important and feelings of superiority by either sex are mistaken. Differences exist, but they are irrelevant in nature.

This message is from Spirit. If you act superior to the other sex because you think your gender is more gifted, you are wrong. Accept the differences and release arrogance.

Built to feel superior, internally and by others

Comments on: "Are men or women superior? Neither!" (5)

© Renee Rothberg and Energy-Guidance-Complete, 2013-2020. Unauthorized use and/or duplication of this material without express and written permission from this blog’s author and/or owner is strictly prohibited. Excerpts and links may be used, provided that full and clear credit is given to Renee Rothberg and Energy-Guidance-Complete with appropriate and specific direction to the original content.